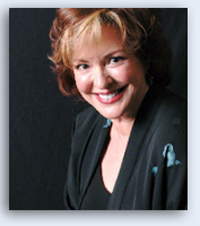 In 1993, when I was in my 30s, my husband, barely 40, was diagnosed with stage 4 colon cancer. Within four months, he was dead, leaving me with three little boys, aged 9, 6 and 3 and life insurance in the amount of his annual salary as an editorial page editor, $32,000. One night, we were reporters at the Inaugural Ball for Bill Clinton’s first administration and I was saying, ‘Honey, someday we’re going to be able to tell our boys we danced with the president.” That was the first night he felt ill.

Dan died at our Madison home on the last day of school. The children were gone for only 45 minutes, to get their report cards. Rob, who was in fourth grade, was hurrying home with a flower everyone had planted for Dad’s day. I believe Dan knew that the kids wouldn’t be there. I had given him medicine and I told him, “It’s been a privilege to be married to you…’ He said, “Thank you.” And he never took another breath. Ten minutes later, after I had washed Dan and changed the bed, the boys burst into the house with their great report cards and gifts. I said, “Our Dad died just now.” For ten years, Rob, our eldest, was furious with me because he had begged to stay home that day, sensing something was mortally wrong, different from all the other horrible days. Dan, who was 6, and who loved to fish with his father, said, “Catch some angel fish for me in heaven Daddy.”

I lost my best friend, my editor, the father of my children. We didn’t know enough to be vigilant and ask Dan to start having colonoscopies in his early 30s or late 20s. He didn’t have to die.

To cope with his death, I listened over and over to the music he loved, the tape played at his funeral. I took solace from the visits of Tony Karls, then the chaplain at Meriter Hospital, who brought God to me because I would not go to Him. It was the beginning of a lifetime friendship. And I allowed myself and my children to be surrounded by the loving friends we’d made over a decade in our house. We found lasagna on the porch at night (to this day, my children won’t eat it) and bags of good but outgrown clothes. We accepted help. We reached out. We clung to each other, spending time together as a “posse” of four.

I was working part-time at the university, so I had some benefits, but I was advised to sell the first real home I’d ever known, with my children’s tree house and first yard. I was paralyzed with grief, fear and the need to give my children some kind of hope to cling to in the eye of the tornado.

A year after Dan’s death, I made a very controversial choice. I adopted my newborn daughter, Francie Nolan, naming her after the character in ‘A Tree Grows in Brooklyn,’ because I thought she would have to grow up poor, struggling up through the concrete without much light or air. And although there were people who literally would not speak to me after this, because they thought I was so irresponsible both to choose NOT to sell my house but scrape from month to month, not take a “real” job and on top of that, adopt another child, she was what truly healed us. She brought breath into the house.

One of the last things Dan said to me before he died was, “In two years’ time, you’ll be so far from here. You’ll be a writer of merit.” Soon after Dan died, I told Jane Hamilton, a great novelist and a friend, about a dream I’d had when Dan as sick, about a woman who lost track of her son in the hotel lobby at her 15th high school reunion. It was just about the time mine had just been held. I was so struck by the narrative quality of the dream that I wrote parts o fit down. And six months later, at night, on a Kaypro computer with a five inch square screen, I began to write. I bought a Mac not long after (it was about the size of a refrigerator).

I wrote at night, when the children were asleep and before they woke up. Friends took them along with their children to picnics and other activities so I’d have two hours to write. And we rented movies and old tapes from the library – The Muppet Show and others, that gave me an hour here and an hour there. I remember going to the library on Friday night, after our ritual dinner out at Danny’s Diner, where we had hot dogs and (for me) veggie burgers, to work until it closed while the boys looked at books at played with the big train set.

Not everyone supported my dream of being a successful author, however. My own brother and the school counselor accused me of being “career obsessed” and not counting the costs on my children. The counselor said I was “irresponsible” and my children would be delinquent. I was accused of filling my own needs and ignoring theirs. The school psychologist suggested I find another career. I suggested he consider the same thing. If I’d been a man, and managed to be at home most of the time with my grieving children, they’d have built a statue of me in front of the school.

Almost two years after Dan died, I finished the last words of my first novel, ‘The Deep End of the Ocean.’ I hadn’t written any fiction since the freshman elective at the University of Illinois. I read books; I didn’t write them. But I needed to do something impossible.

Jane and I never imagined that it would be a bestseller, the first Oprah Winfrey book, a major film, a huge success that has sold, now, more than 10 million copies worldwide (PS I don’t get paid for each of those!). Jane only knew it would give me the strength the go on, to show the boys that there was life after death.

Since all this happened, I have written several more books and have speaking engagements, which everyone can learn about at www.jacquelynmitchard.com. I have married a wonderful man who is an at-home father to our two-and-four-year-old sons. I suffered torments of doubt and fear and still do… but I now have seven children. My three little boys are young men now – 19, 21 and 23 – all in college, all studying creative pursuits. One wants to be an actor, one a chef, one to design mass platform computer games based on mythology. My two daughters are 9 and 12 and fate brought us our little boys, when I was way too old for that!

If Dan hadn’t died, I would have remained a freelance reporter for life. I never even would have tried writing fiction because I had no training, experience or belief in it. In exchange for his loss, Dan helped give me a second act in my life. Unlike F. Scott Fitzgerald, I do believe there are second acts in American life.