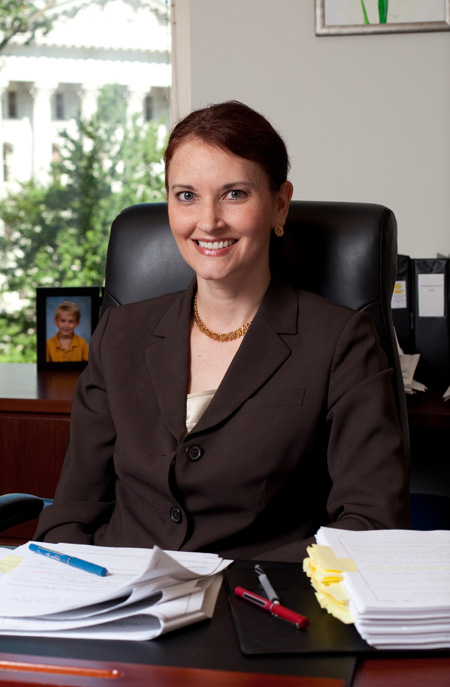 My appetite for serving the public interest has stewed in me for some time, but I did not find full satisfaction in my endeavors until my life fell apart.

My first 30 years of life clipped along as planned. Then, after trying for four years to conceive with my husband, I faced for the first time a situation that was entirely unexpected and out of my control. I tried to mitigate the anxiety that accompanies in vitro fertilization with acupuncture, a vigorous and regular workout, yoga and an inspirational book by Florence Scovel Shinn entitled “The Game of Life and How to Play It.”

My hard work and dedication paid off on the breezy morning of October 23, 2004, when my boy/girl twins were born. They were about six weeks premature, but healthy. I was so happy that I had maintained my poise during the latter part of my struggle with infertility, a struggle that I had labeled “The most excruciating, agonizing experience of my life.”

Three weeks later, I would eat those words. It was two days before Thanksgiving and I was laying in my bed sobbing. Only a few hours earlier my husband had walked into the bedroom to inform me that his “love bank is dry.” “How could he leave after all we’ve been through?” I kept asking myself uncontrollably. “What about all our history – and our plans? Do those mean nothing?” Flashes of our life clicked through my head like a camera capturing each moment: seven years of dating; eleven years of marriage; our year living in Europe, the many college degrees we attained; three homes we fixed with sweat equity, our acre of land and the blue prints for our dream home sitting on the kitchen counter downstairs; our beautiful babies; the birthday flowers and love note from a week before.

Until I knew why this happened it became impossible to move forward. I learned the answer five months later after I had moved into my own house and after he had asked me to sign a legal document dividing our property in anticipation of a divorce. He confessed that despite his many denials previously, there was indeed someone else. My heart sank. “There’s more,” he added. My mouth dropped. “She’s married and she’s pregnant with my child, due in a few months” he said soberly.

I learned that he and this woman had an off and on affair throughout my pregnancy. I did the math and determined that her pregnancy began just as mine ended. That explained his cruel treatment of me when my water broke on the morning of October 23rd (“Pack your own things for the hospital, I don’t know what you want,” he said coldly), his long absence during my labor at the hospital and his mysterious disappearance for almost an entire Saturday a couple of weeks later (“I’m just going to Home Depot, I’ll be back in time for dinner,” leaving me to care for the twins and myself unexpectedly). I felt ashamed to have been so blind.

Nevertheless, having an explanation for his departure, as disgusting as it was, brought me some closure and comfort. I no longer blamed myself entirely for his leaving. I knew that none of my flaws deserved his abandonment and cruelty. I felt righteous and a bit re-energized. I could now start to move on.

The early days in my journey from moving past my former life to finding a new one were not easy. I did what I could to focus on happy occasions, and if none were on the horizon, I created them. I threw a party to celebrate my “independence.” I visited friends and family. I continued to exercise regularly. I took pride in the care I provided for me and the twins. I lost all my weight gain from pregnancy – and then some! “You just had twins? How did you lose all that weight so quickly?” people would ask. “Ask my soon-to-be ex-husband,” I’d say with a chuckle.

During the times of deepest despair I took life a half day at a time. I didn’t think beyond a few hours ahead. I allowed myself to stop thinking of the far off future that once occupied most of my thoughts with big dreams and plans. When emotions ran high, I learned to “stand still.” Living completely in the present became a great coping skill. The other key ingredient to my coping skills was my parents, who sold my childhood home in Wausau, Wisconsin and moved to Madison to help me care for my twins.

Over time, I learned to focus on my needs and how I could make my life happy and fulfilling, not how someone else could do that for me. My family and friends had the best intentions, but because they had not walked in my shoes, their advice was not always comforting or helpful. I learned to trust my intuition above all else.

Within a year of my husband’s departure, I decided to create my own meaning out of this horrible experience. It first started as wanting to write my story, but morphed into wanting others to share their stories of overcoming despair. I let my creativity run its course but also anchored it in my experience and deep-seeded desire to do something bigger than myself. Then, one cool summer evening while eating dinner with a new found love, I created the word “LemonSpark.” Quickly, I registered the domain name and started talking to people about the LemonSpark idea. Just over three years after the initial shock of my “lemon,” here I am, sharing my story and seeking others to share their stories so that all those who experience loss, discouragement or heartache can realize that from those lemons might spark their life’s purpose. If you have a LemonSpark story, please share it through this website.