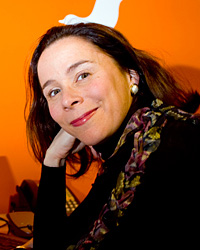 Entrepreneurship is in Kelly Fitzsimmons’ blood. Her father and grandfather owned successful businesses and it didn’t take long for her to follow them. In college she realized that her temperament was not fit for academia. So, at the sprightly age of 25, Kelly started an information security consultancy business called Sun Tzu Security. Her interest in IT originated from working in IT services for several years and taking classes in Java programming and firewalling at Marquette University. As her business developed in 1996, she realized that Sun Tzu was one of the first pure play information security firms in the country. Information security was a new concept and at the time, most companies were just beginning to adopt internet connectivity in the workplace.

Sun Tzu grew to 24 employees and was thriving. Kelly’s fear of failure, looking stupid and appearing crazy drove her to avoid making her fears a reality. Yet, when people try so hard to escape their fear, that’s when it catches up with them. The success of Sun Tzu propelled Kelly to make a classic entrepreneurial mistake, which was to start a second company while the first was still trying to grow. For the second company, Kelly tried raising a million dollars with a strategic investor. Then, in March 2000, the internet bubble burst. The new company was unable to sell product and it needed more capital. The contract with the strategic investor included terms that grew the debt, which eventually reached $5 million. This was way more than Kelly was worth. To make matters worse, Kelly’s father was a co-guarantor for the new company and after 9/11, for the first time in the history of her father’s manufacturing business, his business faced downsizing. How would she ever repay this debt?

Kelly couldn’t breathe. She felt like she would die. Her worst fears came to fruition. She viewed herself as a complete loser who was stupid, a failure, and crazy. She felt embarrassed for having been so cavalier towards her business ventures. Emotionally and financially, she had hit rock bottom. She was able to renegotiate the debt with the strategic investor and pay off the debt, but it wiped her out.

During the next year, Kelly tried to figure out why things weren’t working out. She was in her early thirties and the fear that had fueled her entrepreneurial drive had run out. Her fear of failure had acted as armor, shielding her desire to live free from it and from her ability to be herself, whoever that may be. It propelled her to live a very fast life and caused her to hit a wall very hard. Now, the fear left her feeling naked, unsure of how to be. Kelly knew instinctively that she needed to embark on radical change within herself, to absolve her fears once and for all, but wasn’t sure how. She talked to two girlfriends, who upon hearing their friend’s tale independently advised her to involve herself with the Center for Authentic Leadership based in Atlanta. She took their advice and entered a program called Future Thinking.

The premise behind Future Thinking is that people can’t lead others until they know what drives them. Most of Kelly’s fellow Future Thinking participants were much older than her, making for uncomfortable encounters. Kelly had hit her wall earlier than most people do, but she soon realized that regardless of the “wall” one hits, it’s the exact same story as everyone else. Emotions are universal and they break down barriers allowing people to connect in unimaginable ways. She learned that she wasn’t alone and indeed, her situation could be worse. Through sharing difficult experiences, Kelly learned that extreme hardship is merely part of life.

The Future Thinking program was life altering for Kelly. She realized that the collapse of her business and facing her darkest fears gave her a chance to become the person she had always wanted to be, without the baggage of being afraid to fail. It was during this “epiphany” that a company named Neohapsis out of Chicago became interested in hiring Kelly as its CEO and taking on Sun Tzu, which was still a viable company despite the demise of Kelly’s second company. Even though Kelly still thought of herself as a failure, Neohapsis saw her as battle-tested and able to weather a storm. Neohapsis had faith in her, which helped her to see herself in a new, more positive way. Over the next three years, Kelly grew Neohapsis four to five fold and she was extremely proud of her achievement. In 2005 she decided to retire and helped her successor transition Neohapsis to new ownership. For the month she was retired, Kelly truly felt grateful for her experience and was ready for a new chapter in life.

Then, her husband approached her about an idea they had tossed around back in 1999 involving a joke-telling website. At the time, the only joke-related websites were text websites. There was a noticeable absence of audio joke-telling websites. In 2006, Google purchased YouTube and Kelly and her husband realized that there was true possibility in audio internet exchange. So, they started Comic Wonder, which is a social networking website with joke competitions made possible through uploading phone submissions. Kelly and her husband have filed two patents involving their audio technology and the website receives approximately 600,000 hits each month. In a way, Kelly’s new venture is fitting of her new outlook on life, which is to use her experience and talents to help people smile.

One take-away lesson from Kelly’s business failure is that real strength is created if after facing a really tough moment in life, you are still standing. Kelly analogizes people with trees. Trees that have never weathered a storm are incredibly weak. Yet, trees near a sea shore that face hard gusts of wind and rain are as tough as nails. Storms can help us find ourselves.