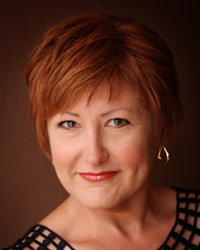 Ever since college, Pat felt frustrated and unfulfilled with her jobs. She had moved to Wisconsin from New York City because of her husband’s new employment as a police officer. She found a job as a paralegal to help support their young son. But she was unhappy with the changes. She had a Master’s degree in film and longed for more creativity and connection with people. A doctor prescribed antidepressants. She gained weight, eventually weighing almost 240 pounds. She realized she was unsure of whether the weight was the source or the result of her depression.

Intellectually curious, she began reading scientific studies about weight loss. She decided to stop taking antidepressants and lose weight permanently. After losing 80 pounds, she saw a posting for a police officer position. The idea of becoming physically fit and helping people in critical times of need was appealing. She applied and was one of 29 out of 1100 applicants that were accepted into the police academy.

Pat suddenly felt reinvigorated. She felt strong. She lifted weights and was the strongest woman in her class. She performed very well in her police science courses. Her instructors gave her great marks in feedback sessions. She excelled in handgun training, legal studies and report writing. Her self-confidence grew. She was convinced this was the job for her, a job that would use her full potential and allow her to help other people.

Then, her female training captain left for vacation. The staff began sabotaging the performance of the four women over 40 in the program by providing incorrect information so that they would fail the training exercises. Within two days, the staff fired three of the four women, including Pat. Upon the training captain’s return, Pat informed her of the set up. The captain sobbed, admitting that many in the department had been unhappy about women over 40 being hired. “This is politics, Pat. It has nothing to do with you,” the captain said. Pat lost her confidence in the police department, an occupation that demands public trust.

Walking to her car from the meeting with her captain, she vowed to never work for anyone else again.

Unsure of her next chapter, she went to the library and read books about business and marketing. After a few months of introspection, she realized that people craved her help with their own weight loss. She had kept her weight off for the 5 years medical science required to qualify it as “permanent weight loss.” She decided her experience achieving permanent weight loss was valuable in the atmosphere of quick fixes and yo-yo dieting that America was experiencing.

She started a consulting business, Catalyst Coaching, to help people lose weight by digging into the source of their weight gain. After hearing about life coaching, she added that service in order to enhance her client’s ability to become healthy and happy. She earned certifications in coaching and her business started to take off.

In order to support their son and keep their home, Pat found a full-time job at a new jewelry store. Determined, she kept her business alive part-time. She became the store’s top sales person very quickly. Her sales experience would help her grow Catalyst Coaching. She learned an important lesson in sales: people will buy from you when you earn their trust. In late 2004, after her husband finished military duty, her business began to thrive. Once again, she could devote her time fully to helping people achieve happiness and fulfillment by becoming healthy. Her business is profitable and she has several contract associates who work with her.

Recently, Pat’s husband started to explore his next options in life and revealed his admiration for Pat’s ability to be an independent businesswoman. In response, Pat said “That’s because I had the good grace of being fired from what I thought was the ultimate job.”